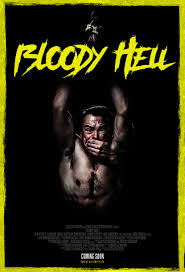 After being sent to prison for the death of an innocent person during a bank robbery he thwarted, Rex and he best bud head to Finland where they end up trapped by a crazed family. Strapped to the ceiling and missing a leg Rex has to find away to escape before things go even more wrong.

Brutal, ugly and wildly uneven black comedy horror film is either one you're going to love or loathe. As good as the bits are this film tries way too hard to be mean and nasty (and it is) while at the same time being big and loud and showy (it is to a painful degree).  I kept trying to figure out how to turn the volume of the film down since it seemed to be shouting at us.

I kind of hate dismissing the film, since it held me from start to finish as few films have, but at the same time this isn't a film I ever need to see again. Frankly by the time this review posts, a week after I've watched the film, I'm guessing the only thing I'm going to remember is the shrill nature of it all.

For those who like bloody, loud, lowbrow black comedies. All other need not apply