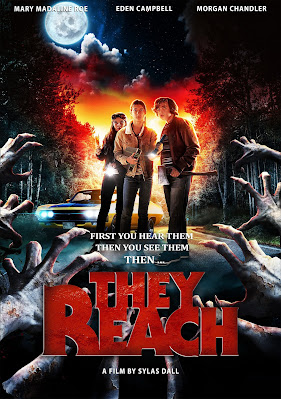 What a nostalgic blast....

In 1979 a science loving young lady stumbles upon a tape recorder in a junk shop. She takes it home unaware that it contains a recording that will unleash a dark entity that wants to be brought back to life. She must enlist her friends and family in a race to stop the evil.

Throwback film is a more akin to MONSTER SQUAD, GOONIES and the kid team up films of a couple of decades back then any recent horror film. It also echoes Don Coscarelli's  grossly under appreciated KENNY AND COMPANY and its real sense of the lives of kids of a certain age at that time.

And while it feels like it belongs grouped with those other films, it has in fact carved it's own place. Its a film that takes the dress of a years ago and used it to wrap up a nifty chilly story.  I like that th old is mixed with the new. There is a modern sense to things, for example the mere fact  that we have a girl in the lead is something we would never have had at the time this was set. And while the blood and gore is minimal how they are shot feels modern.

What delighted me is that, having grown up at the same time, and being right about the same age as the characters in the film, I can honestly say they nailed the time period. Yea, maybe the turns of phrase might be slight anachronistic once or twice, but for the most part they got the time period right. That is why I mentioned Coscarelli's KENNY AND COMPANY, which was made in 1976 and is a representation of the same time period (minus the Star War references)

This is a great film.Its a great horror film  and great horror film for the family. That is not a knock, only a statement that in a time where blood, gore sex and foul language fill horror films this is one you can pretty much show anyone who wants to be scared.