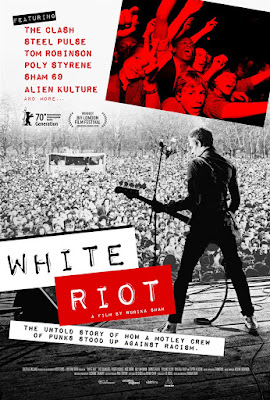 The story of Rock Against Racism which came to be in the 1970's as an answer to the rise of the National Front, a political movement that sought t remove all the non-whites from England. The film covers the story of RAR from it's founding to the legendary concert in Victoria Park where 100,000 people marched and then filled the park.

A film for our time, WHITE RIOT, is the story of a time that mirrors the current one where racism is running rampant and many are feeling the need to step up and say that will not do. A hopeful tale that explains how regular people can make a stand and make a difference (The National Front was defeated in the polls not long after)

I loved this film. Not only is it filled with killer music. It is a hell of a story. Watching it you get sucked in and then dragged along. To be perfectly honest I thought I was going to be able to just listen to the film, but instead I found that I was sitting on the edge of my seat and leaning in to get closer to it all.

I can't recommend WHITE RIOT enough It's a story that needs to be told because it puts us in touch with our history (such as the fact that Eric Clapton, David Bowie and Rod Stewart supported the National Front). I was only vaguely aware of what the National Front was and hate it spawned. It opened my eyes and reminded me that the evils of the past are always lurking around.

Opening tomorrow in virtual cinemas, it is a must see.

(For those wondering the name of the film is from a Clash song that RAR put on posters.)