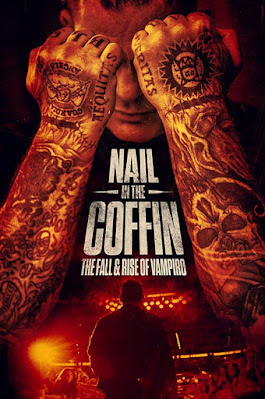 I have a story, so bear with me.

I was sliding into to the mad festival season at the end of September and I was offered the film NAIL IN THE COFFIN: THE FALL AND RISE OF VAMPIRO for coverage . I looked at my schedule and realized that there really was no way I could fit it in with all that I was doing. I couldn’t find it in me to add one more film so I passed on the film.

A couple of days ago I got an email from a friend of mine asking me if I had seen the film. They thought it was super and if I hadn’t seen it they were insisting that I had to see it. Up to my eyeballs in festival films I had no room to cover the film. I couldn’t do it, but I know my friend and she is almost never wrong so I asked her “Is it really that that good?”

“Yes” she said, “Even if you don’t like wrestling”

I told here if she could get me a link I’d take a look. She did. And as soon as I found a sliver of time I sat down and I watched it.

And once again my friend hit it out of the park.

NAIL IN THE COFFIN: THE FALL AND RISE OF VAMPIRO is a great film.

Okay first things first, while the film is about Ian Hodgkinson who is best known as the wrestler El Vampiro, it isn’t about wrestling. It is about a crazy guy who made a career doing the thing he loved and helped grow a business. More importantly, this is the story of a father and a daughter, since a chunk of the film focuses on Hodgkinson and his daughter.

Just As I was told you need to see this- I'm telling you you need to see this too. This is a just a great portrait of a great guy. He maybe a wrestler and he may be covered in scary tattoos but he is a lovely man. He loves his fans, he loves the people he works with and he adores his daughter beyond words. You can’t help but fall in love with the guy… Not having a typical biography structure the film starts off by throwing us into the bread and circuses of Hodgkinson‘s life. We watch him going through his paces and getting a 25th anniversary wrestling show ready. Its exhausting  but we click in and are physically dragged along. The film then shifts back in time and we meet the young man from Canada who fell in love with wrestling and headed south to Mexico. We then follow his career as he we also watch his present.

Highly recommended, this is one of the great finds of the year if not one of the best films, NAIL IN THE COFFIN: THE FALL AND RISE OF VAMPIRO hits VOD and home video and home video in Canada on Tuesday while currently being available in the US.