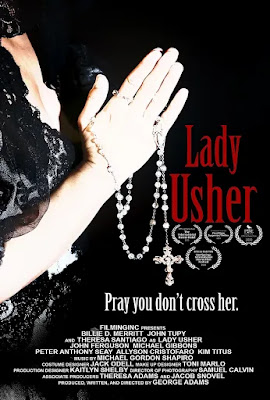 Based on Poe's Fall Of The House Of Usher, LADY USHER is far from a straight on adaption but a modern riff on the material.

College students Morgan and Roderick are in love. When Roderick's father takes a turn for the worse he heads home. Morgan decides to show her support and heads to her boyfriends house. She is warily admitted to the house, which seems stuck in another time. As Morgan tries to be there for Roderick she begins to realize that his family is stranger than she could ever imagine.

Deeply disturbing thriller goes to places I never expected. While the film isn't graphicly violent the atmosphere is really really off. This is one messed up family and it will make you shake your head. Don't look for me to tell you what happens, part of the fun is seeing the dark turns that make you talk to the screen. (Really? Really? I said several times.)

While some of the presentation can be uneven, the perils of low budget filmmaking, you won't care because this film's depravity just grabs you and yanks you along.

Highly recommended for anyone who wants something off the beaten past.