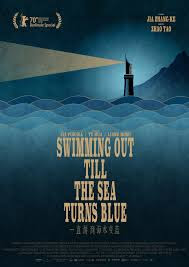 With his new film Swimming Out Till the Sea Turns Blue, Jia Zhangke completes an informal trilogy begun in 2006 examining different modes of Chinese art. The first, Dong, was about painting, centering specifically on artist Liu Xiaodong as he painted a group portrait of laborers at the Three Gorges Dam. The second, Useless (2007), explored Chinese fashion, alternating focus between textile factory workers and leading designers. In this film Jia turns to one of China’s most ancient art forms: writing.

The idea of Jia making a movie about literature is a curious one; his films already eschew traditional storytelling in favor of more poetic—dare we say literary—modes of aesthetic evocation and expression. Indeed, Swimming is more cinematic poem than ordinary documentary despite numerous talking head interviews. Jia focuses on the lives of four prominent Chinese writers—Ma Feng, Jia Pingwa, Yu Hua, and Liang Hong. Of these, Ma is the lodestar around which the others orbit, being both the oldest (he died in 2004) and having come to prominence writing stories about countryside life in Jia’s home province of Shanxi.

In between interviews, Jia intersperses vignettes that evoke the moods and emotional undercurrents beneath the ever-metamorphosing China that birthed the four of them: a line of seniors lining up for bowls of rice, a provincial family making jiaozi together in their kitchen, an overlapping cacophony of speakers at a literary conference. It’s in these vignettes that Jia’s career-long fascination with China’s industrial modernization comes to the forefront, accentuated by a brooding soundtrack that switches between swelling-and-sighing woodwinds and Western classical music. (In a truly head-scratching moment, we see a group of Chinese young people staring out the windows of a train while an English-language translation of Con te partirò plays in the background.)

But the film’s main issue is that there’s no cohesive throughline. The writers are given very little introduction or contextualization. Who are they? What have they actually written? Who have they influenced? These writers are described as provincial ones, so one must assume that many native Chinese viewers would be equally confused as Westerners ignorant of modern Chinese literature. By the end we’re left with many unanswered questions. Is this documentary about Ma? Is it about Chinese literature itself? Or is it more broadly about modern China? It’s impossible to know, because the film itself doesn’t seem to.