What The Constitution Means To Me (2020) 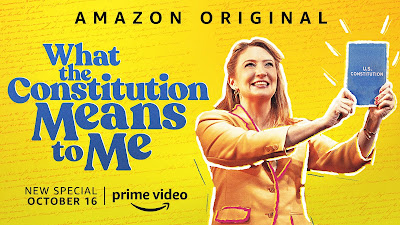 I was told that WHAT THE CONSTITUTION MEANS TO ME was a great show. Friends who saw it on and off Broadway raved about it. Now a filmed version of the play which was a finalist for the Pulitzer Prize is hitting Amazon and I am left scratching my head.

The play is playwright Heidi Schreck story of how she funded her college education by speaking on the American Constitution.  She then contrasts her feelings when she was 15 with her feelings now, when how she sees the world has changed. The play ponders the state of the world, the inequalities in America and how women are nowhere near as equal as we would like.

I honestly don’t know how I feel about this presentation.  This is very much a filmed stage play with Schreck annunciating for the back rows as opposed to speaking to a TV audience. Her gestures are larger than they would be if this were a true TV presentation. The big theatrics kind of worked against me truly connecting to what probably a great live show.

Don’t get me wrong Scheck‘s exploration of the state of America and how it is really controlled by older white males is full of food for thought. As the show makes clear something has to be done to make things more equal- something that we see in this post Covid world. It’s a show full of painful truths like one third of women are sexually assaulted and one in five is raped.Schreck‘s discussion of that is crushing, but it is a truth that needs to be heard.

I’m sorry if I haven’t been truly helpful in discussing the show itself, frankly you should probably look of reviews of the theatrical performances. I have chosen to talk about how the it is clear to me, as some one who has seen hundreds of shows, that the  straight forward shifting of mediums may have worked against it. I’m doing it because all I could think of was this would have been better in a theater.