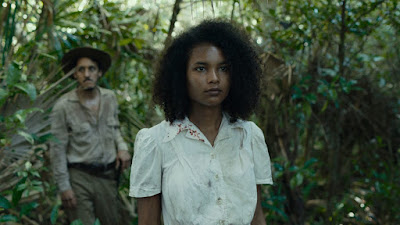 TRAGIC JUNGLE vexes me.  It seems to be wanting to cover the same ground as several recent horror films but it feels like it will never fully commit to sliding into the darkness.

The film follows young Agnes who is fleeing into the jungle with her sister and a guide. An older Englishman wants to marry her but she wants no part of it, so she flees into the jungle. Her "perspective" beau follows with several armed men and dogs to bring her back or kill her. The Englishman kills the sister and the guide, but Agnes manages to get away where she is taken in by a group of men cutting trees for rubber. They eventually begin to believe that Agnes may actually be a demon.

Lyric adventure film is similar to any number of recent jungle films (EMBRACE THE SERPENT) as well as any number of recent films where an “outsider” is found to be an evil force (LUZ: THE FLOWER OF EVIL).  Its an always beautiful frequently hypnotic film that tries to pull us in and carry us along.

The problems for me come from two places. The first is the film seems to be trying to take an artistic turn at the lyric demon in the sheep’s clothing tales that many genre filmmakers are cranking out. What the film does with it is very good, but by not going for the full on commitment, and dare I say horror, the film ends up being a bit toothless and not always compelling since we are waiting for a scare or a catharsis that ever comes (the end could have been shattering if done right).

The other problem is that Indira Andrewin as Agnes is dull. Saying very little  she looks gorgeous but is a complete cypher. By the end of the film I should have been going WOW, feeling something for her but instead I was going "oh. That's it?" Worse she isn’t very good delivering the few lines she has.

TRAGIC JUNGLE isn’t bad but it isn’t anything special.