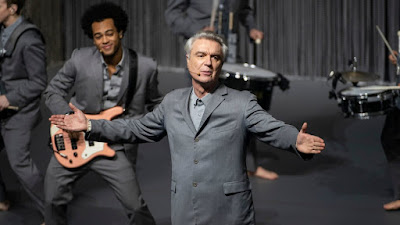 If you lived or worked in New York City at any given time from late 2019 to early 2020, you knew about David Byrne’s American Utopia. Not because you’d necessarily seen it—running for only five months at the Hudson Theatre, what few tickets there were quickly evaporated. Instead, you knew about the show because the advertisers ran one of the most inescapable subway ad campaigns I saw in my five years living in the city. The posters were still up as the city shuttered in April for Coronavirus two months after the show closed, and when I (begrudgingly) braved the subway for the first time post-lockdown in August, some of the damned things were still up!
Though the show is long gone (and because of COVID, plans for a late 2020 revival met the same grisly fate as every other show on and off Broadway this season), those curious to see it can enjoy Spike Lee’s filmed version produced by HBO. Those hoping for a spiritual follow-up to Jonathan Demme’s Stop Making Sense (1984) will be happy to see that in forty years Byrne has lost none of his captivating charm as a robotic dork-funk messiah, as will they be pleased to hear several of that show’s most famous numbers like “Once in a Lifetime,” “Burning Down the House,” and a tragically lampshade-less “This Must Be the Place.” Much of Byrne’s new material is undeniably up to snuff as well, such as the catchy yet indescribably sinister single “Everybody’s Coming to My House” and the show opener “Here” which proves that Byrne is perhaps the only man on earth who could make audiences teary-eyed with a song about the corpus callosum. The big showstopper is a defiant cover of Janelle Monáe’s “Hell You Talmbout,” a protest song shouting out the names of police brutality victims that reaches the stratosphere when Lee starts intercutting the song with shots of the victims’ families holding portraits of the deceased.
Though not as unified as Stop Making Sense with Demme’s gradual introduction of the band, slow addition of multimedia elements, and joyous finale where the house lights turn on and the cameras turn to the audience, American Utopia is still a marvelous production by one of rock’s most creative personalities, with just enough political material to make it timely and just enough big hits to make it timeless.
Posted by Steve Kopian at October 07, 2020