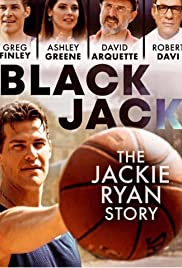 BLACK JACK is a disappointing film. The story of Jackie Ryan hailed as one of the greatest street basketball players of all time and allegedly the greatest 3 point shooters ever, the film is weirdly devoid of  basketball.

This is pretty much about Ryan's life with his family and his friends.  Basketball is there, it hovers around the edges but the way the story is told it doesn't really seem t be the point of things. I mean there isn't as much as you would think there would be. I mean  there is so little here that I honest to god have no idea why anyone would tell his story. He was a great player? Really? I haven't seen anything here that would make me think so.

I blame the script. Full of clunky lines and characters that seem more like stereotypes then real people none of this feels real. Listening to Ryan talk to his friends and family I was laughing. It sounds like someone took every cliche about Brooklyn and put them together. It left me wondering how the hell do you make David Arquette give a bad performance? I never believed this for a second.

Worse I never cared. I really didn't care about Jackie or anyone in this film. As presented here he is an also ran and he never

Email ThisBlogThis!Share to TwitterShare to FacebookShare to Pinterest
Labels: biography, drama, not worth the effort, sports