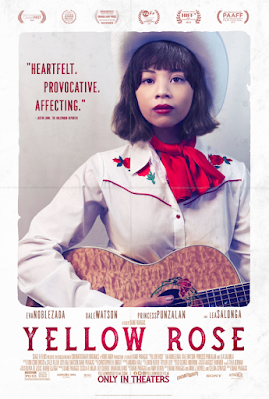 Filipina teen with a passion for country music has to decide what to do when he mother is picked up by immigration and the process begins for her deportation. Does she go with her mom to a country she has never been to or does she stay and try to become a country singer?
A great cast keeps this by the numbers film afloat. The cast headed by Broadway stars Eva Noblezada and Lea Salonga sells the story by making us really care about the characters. These are some really nice people and our heartbreaks at the thought that anything bad would happen to them.
The problem with the film is that the script, while creating some real characters, doesn't do anything we didn't expect. Once things are put in motion by the ICE raid we can largely follow things out until the end. More so in that the promotional material features Noblezada in a very country outfit. Additionally it doesn't help that pretty much everyone is ultimately a nice person so the level of conflict is kept to a minimum.
Don't get me wrong, I like the film but I don't love it. I love the characters and the music which makes the film worth trying.
Posted by Steve Kopian at October 05, 2020