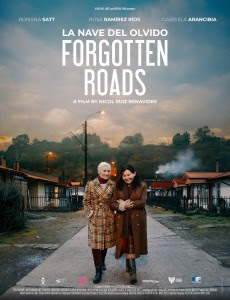 Covid has me seeing a lot of films I never intended to see and discovering films that make me feel stupidly wonderful. I don’t think that was something that whom ever created the virus intended.

The latest ball of pure joy is Forgotten Roads which is playing at NewFest. This wonderful little film is about Claudina who is dealing with the death of her husband. Forced to leave her house she moves in with her daughter and grandson. She then quickly meets ELsa who lives next door with her husband who goes away on trips frequently. The friendship between the two women becomes something more and eventually Claudina begins to see possibilities in life .

This film  absolutely delighted me. I fell head over heels for everyone, so much so I want to know where this place in Chile is so I can go down and meet them all. More to the point I want to break social distancing protocols and give everyone a big bear hug.

I was moved to tears, and the ending had me going – “Yes Yes Yes” out loud. Sure that finale could be considered being a tad cliché- but the  moment, the marriage of images and the song is so damn perfect I had to not only talk to the screen but clap and bounce in my seat. (I was  watching this during an extended lunch at work and my reaction made the people around me go- what are you watching- to which all I could say was “Something wonderful”)

That the film works as well as it does is entirely due to the cast who sell it and especially the two ladies at the center Rosa Ramirez and Romana Salt. They make this a magnificent film that should be playing everywhere. Ramirez in particular gives a performance that has burned itself in my heart. When she smiled  my hard exterior shell cracked and let the sunlight in.  If there was a god she would be in the running for all of the year end awards.

See it at NewFest or wherever you can.