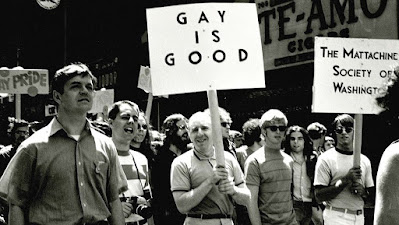 CURED wrecked me. Several times in the film I found myself sobbing and had to stop the film. I am not entirely sure why, I knew how it comes out, but at the same time heart broke time and again as these heroes of our times related the stories of their lives and struggles.

CURED is the story of the fight to get homosexuality off the list of mental diseases in the American Psychiatric Association's list of illnesses, the Diagnostic and Statistical Manual of Mental Disorders. It is a battle that a group of activists fought for almost two decades, taking small victories where they could. They knew that the small victories would eventually lead to a greater victory, and they were right. It was because of their determination that minds changed and suddenly several million people who were once mentally ill were now cured.

Full of interviews with the surviving activists as well as with lots of historical footage, CURED is a glorious, often heartbreaking, look at the fight to simply be viewed as a normal human. This film will touch you repeatedly. As I said at the top the film brought me to tears several times and I have no doubt that it will do the same for you.

Forgive me if I don't say a great deal about the film but I really don't know what to say. This is a story we all need to hear and see.

One of the most important films of the year.

See it at New Fest