Beyond the Dream (2020) Asian Pop Up Cinema Drive-in Fest 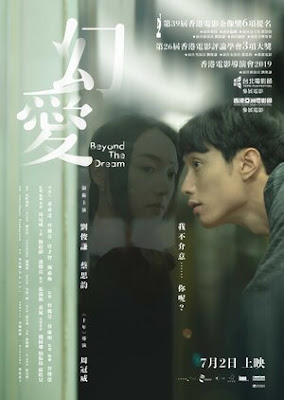 A young man with schizophrenia meets a young woman and falls for her. She is a clinical psychologist with a secret.

This is a surprisingly good romantic drama/mystery that I wasn’t certain I was going to like. I say this because there was a few moments at the start where I kind of groaned at the prospect of this film going a certain way, but  then Lau Chun Him and Cecilia Choi won me over and I found I was dragged along wanting desperately to know how this was going to play out, despite the fact I kind of had an idea where this was going to go.

In all seriousness  Lau Chun Him and Cecilia Choi are fantastic. They are the reason that this film is a must see. They have a naturalness that pulls you in. More importantly they have a chemistry that makes the romance believable. Way too often you can’t believe the two people on screen would ever get together. Here it makes sense. Here you believe and it warms the cockles of your heart.

To be honest this film is a small joy. To be honest I didn’t have any plans on covering this film but just as a slot opened up in my viewing schedule it arrived and I said yes. It was kismet because I discovered a sweet little romance I could recommend to friends.