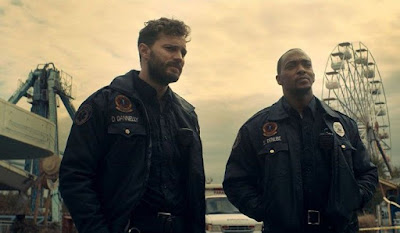 Justin Benson and Aaron Moorhead's follow up to their film THE ENDLESS is a trippy time travel film that you are either going to buy or not.

The film has two paramedics Anthony Mackie and Jamie Dornan running across some weird occurances. All of them seem to be tied to a new designer drug called Synchronic. When Dornan's teenage daughter disappears after using the drug Mackie tries to buy up as much as he can. He is then informed that the drug can be used to time travel and that the missing girl maybe somewhere in time. He then begins a frantic search for her before the drug or the tumor in his head kills him.

I find Bendon and Moorhead's films a mixed bag. Some like THE ENDLESS I like despite it's flaws and others, like SYNCHRONIC I think get overwhelmed by the strangeness. The sometimes want to make us think at the cost of an sort of internal logic.

SYNCHRONIC for all it's narrative mess, is a beautifully acted film with a lot to say about what it means to be alive and what is important. There is a good many thematic elements that really shine and I tried to hold on to them as best I could in the hope that they would tide me over until the plot came together. It never happened.

Sadly the plot doesn't make a hell of a lot of sense. Assuming we accept that there could be a pill that bends time what spins out from it isn't always logical and it left me scratching my head. For example the inventor of the pill sets up rules that the film seems to ignore. Mackie's trips don't always make logical sense (I can't say what since it will give plot twists away). Forgive me I will go along with plot twists as long as they are internally logical, but as with the director's other films, things are often bent to do what they want them to do. When confronted with a film which keeps changing things up I am reminded of Raymond Chandler's warning that an audience will by one illogical thing, maybe two, but never more than that. If you do that the audience will be lost.

As much as I don't like the film as a whole I do like pieces and as such recommend it for anyone who wants to see an interesting misfire.