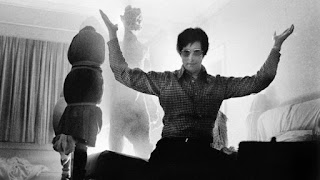 Alexandre O. Phillippe (78/52) sits down with William Friedkin and lets him tell us everything he did to make THE EXORCIST and to a lesser extent many of his other films.

How you react to the film is going to be determined by two things. The first is how you take to the stream on consciousness presentation of the material. Friedkin simply talks about making the film and Phillippe illustrates. It is told in a rough chronological order but bits of the story are put in place where and when Friedkin brings them up. The other bit is going to be determined by hw well you know the film. If you are like me and only have a passing knowledge of the film much of this is going to come across as a bit arcane. I don't remember every moment he is recalling, so I felt lost.

I like LEAP OF FAITH but I don't love it. While I find Friedkin's talk absolutely fascinating, I also found it overwhelming. It's not that its bad but almost two hours of stream of consciousness talk on a film I kind of like is is quite my cup of tea.

If you are a fan of THE EXORCIST or a fan of how movies are made this is a must. For everyone else expect to like it but I think you'll find it works in small doses.