May The Devil Take You Too (2020) NightStream 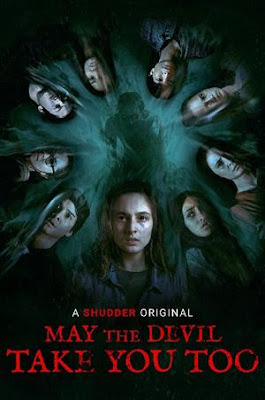 Timo Tjahjanto is back with a sequel to his 2018 chiller. I liked the original but loved the pieces. The same holds true here, though some of the sequences are truly kick ass.

The plot of the film has Alfie, the girl who lived in the previous installment being kidnapped by a bunch of orphans who were raised in an orphanage  where a dark presence lives. They want to fight the evil but need Alphie because they know she will be able to see the evil.

Built like a thrill ride with an ever increasing level of nastiness. The sequences are tense because we genuinely don't know what is going to happen next. Trust me, there are genuine scare here that how beyond simple loud jump scares. Many of the images of the demons are downright frightening.

And that is where  the problem lies, the cast should be wetting themselves and instead they don't appear to be full invested. Perhaps its the way Tjahjanto shot them or perhaps it's because they aren't that good at pretending to be scared, but every I got a good look at one of the cast members the tension drained.

Cast aside, the sequences here are killer. More so since the CGI f the first film seems to be largely gone (yea practical effects!). Truth be told few horror films of recent vintage can boast as many chilling sequences  as this film and as such it is recommended to anyone who likes their horror films scary and doesn't mind if they are bloody.

MAY THE DEVIL TAKE YOU TOO has just played NightStream and will be available on Shudder on the 26th of October.