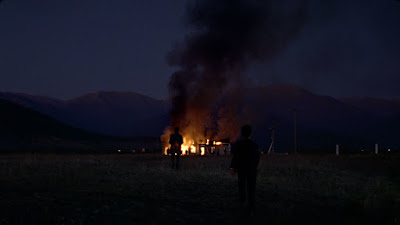 A woman tries to come to terms with her life after the Jehovah’s Witness church she helped set up is fire bombed burning a service.  Forced into having  an awakening in her life she realizes her place in her home, her religion and society is not what she wants.

Told in long static shots and meaningful silences this is either going to connect with the art house film lover in you or it’s going to hit that sweet spot that makes you fall deeply asleep. Count me in the second group.

I never connected to the film with the films shot at a distance immobile shots kept me at a distance. I don’t blame the way of shooting the film but how this director and her cinematographer shot it. I say this because filmmakers like Chantel Akerman and Bela Tarr have used similar techniques and have made films that drew you in and kept you part of the action by framing things in ways that make sense- Akerman will put us into the room by positioning us in a place that makes sense and puts us in the room. I don’t think any of the camera placements in Beginning makes any sense.  They are disconnected and dispassionate . One could argue that they are the eyes of god, but I can’t see god being that outside of events.  An early scene where the police arrive at the missionaries house we are so far out of events as to be in another film altogether. We are, for most of the scene in a hallway far away from what is happening and I really don’t know why.  Placing the camera there, even as an observer makes no sense since no observer or voyeur  would stand there.

I probably should pull things apart further like how some turns of events don’t make logical sense (and I only thought about because I was too disconnected to the story to care)  or  how the vast cold emptiness in most frames  and their reflection into the emptiness of our heroine’s life is much too cliché to be believed.

I was left shaking my head by Beginnings.