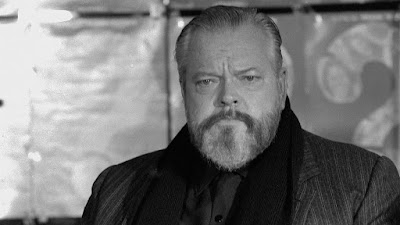 Ever wonder what would happen if Orson Welles  invited Dennis Hopper to dinner? It happened in 1970 when Welles was working on The Other Side of The Wind and Hopper was finishing The Last Movie. Welles filmed the conversation with an eye of putting the material into his film. What transpired was over two hours of thought provoking conversation that covered film, politics, religion and many other assorted subjects.

This film is magnificent. It is a glorious time capsule of a moment in time where two well-read  filmmakers sit and talk to each other as equals. The result is one of the most compelling films on film I’ve ever seen.  There is no dumbing down since both men are not interested in anyone who is going to see the film, they are just talking. I walked away from the film with a greater respect of Welles and Hopper. Not that I didn’t have great respect before- but here were clues to the films they made that I had never run across before.

One of the things I love was the discussion of the two men talking about the audience. Hopper was shocked at the varying reaction to the end of Easy Rider in different parts of America, as well as a slight confusion that people viewed his and Peter Fonda’s characters as heroes, in his mind they were outlaws. This spins off into a discussion about how they view the people in a theater called an audience (Welles says “fuck them” contemptuously). They don’t fully understand the faceless mob and as a result seem to be making the films for themselves and for the select people who get what they are doing. (though Hopper expresses the desire to get some of John Wayne’s audience). Hopper said that he puts things into his films for himself.

The conversation spins off into unexpected places. There is a long discussion of god. Welles pushes Hopper about politics and asks him why doesn’t speak out and he says that where he lives it would be difficult (the FBI is constantly warning him about his neighbors). I love how the quiet discussion of the things that Hopper had done, marching with Martin Luther King and elsewhere is counterpointed with his kind of disbelief at how Jane Fonda who was viewed as a counter culture icon but all he saw her doing was going to the beach and parties with Roger Vadim.

What I absolutely love about the film, beyond it being intellectually stimulating, is that there is line after line I want to steal. In all seriousness after paying to see the film at the New York Film Festival I contacted the publicist for the film and asked for a screener because I wanted to see it again so I could write down all of the great lines and use them in various situations.

Who the hell needs My Dinner with Andre, I’ll take a dinner with Dennis Hopper any day.

Highly recommended- even more so if you love the movies, the filmmakers or just great conversation.