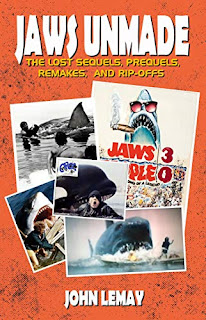 John LeMay is at it again with yet another book taking a look at an influential film that spawned sequels, rip-offs and failed projects put together in the hope of getting on the gravy train. After doing Godzilla and King Kong LeMay turns his sights on the original  summer blockbuster Jaws.

As with the earlier books in what is now is a series LeMay looks at the original film before moving on to the sequels and rip-offs.  What is interesting this time out is LeMay includes several films that are considered rip-offs but were in production before or  during the production of Jaws.

What I find amusing is how many films were started as comedies but then went sideways. The various incarnations of Jaws 3 all started as comedies (including the legendary Jaws 3 People 0) before it was decided that if they made a joke of everything they would lose the ability to ever make another serious film. Another film Up From the Depths was shot as comedy until Roger Corman blew a gasket and cut the life out of it and reshot the effects.

As with all of LeMay's books  everything he found that he could find a reference for is included so odd projects, like some of the Orca sequels (King Kong vs Orca) where all we have is a supposed title. While these projects are lacking in detail they are full of food for thought as we are left to wonder what they were thinking.

Reading the book I was grandly entertained. I was so entertained that I started to make a list of all the films I haven’t seen or haven’t seen in years since the chapters have me jonesing to revisit them.

While you can find much of this information else where LaMay has brought it together and strug it together so that In the end this book is a blast.