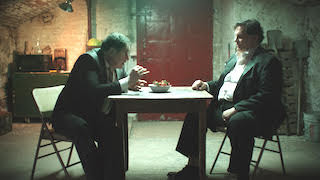 Skip Sudduth and Richard Kind give two of the best performances you'll see all decade in THE RECEPTION, a stunning film that needs to be in the Oscar mix.

Set in a future time when the US is in the middle of a civil war two fathers lock themselves in the basement of a church after the wedding reception of their sons is attacked by militia. They know their time is limited before the militia comes in and kills them and they spend their final moments pondering their lives, their children and life in general.

I have very little to say other than filmmaking doesn't get better than this. This is a perfect film that delights you, makes you smile and brings you to the point of tears. It is a glorious celebration of life, even as it is running out.

I would like to say that all filmmakers need to study the world building of this film. Set in another America the whole world is set out in four of five carefully chosen lines of dialog which tell us everything we need to know without over explaining or killing momentum. This is the way films should be set up.

As for Sudduth and Kind their performances are ones for the ages. acting of any sort doesn't get better than this. If it can I will be really surprised. They nail it from first frame to the last with the result that we laugh and cry with with them, and even feel a sense of hope as they live in the moment.

This is an absolute must see.

It is playing at San Jose Short Film Fest Sunday in the Alternate Universe section. (Get tickets here)