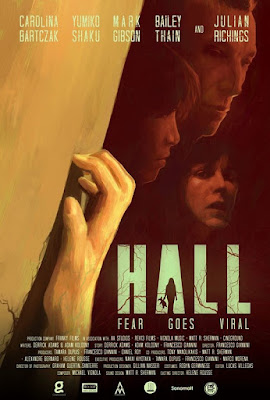 Microcosm horror film about the beginning of an outbreak of a disease in a hotel.  It follows what happens when a young family of three checks in and then has to deal with the outbreak…which includes the father. Will mother and her daughter be able to escape?

If you ever wondered what might happen if a strange disease broke out  while you were in a hotel this film gives us a good idea. While we don’t know what the ultimate progression of the disease is going to be, it’s a most assuredly not pleasant.  What ever is happening to these people I wouldn’t want to experience it.

While the film takes a little bit to finding it’s footing, once it gets going it is really good and makes you wonder why no one made a small little gem like this before.  This is a largely realistic (with in reason) take on the start of an outbreak  and its chilling.

If there is anything really wrong with the film is its effort to try and give us an explanation of what is happening. As much as I like the one scene cameo for Julian Richings, the film doesn’t need it. This is a film about the start of something terrible, we don’t need all the details, especially since the final fade out gives us all we need to know.

Email ThisBlogThis!Share to TwitterShare to FacebookShare to Pinterest
Labels: horror, The Blood in the Snow Canadian Film Festival 2020