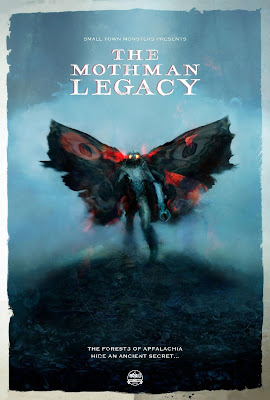 Unexpectedly good documentary on the whole legend of the Mothman. The giant red eyed creature was first sighted in Point Pleasant Virginia in the 1960’s right before the Silver Bridge collapsed killing 47. The mystery was chronicled in  the book the Mothman Prophecies by John Keel, who was then haunted by the mystery for the rest of his life.

Focusing on the town, the legend, the life and times of John Keel who was the guy on the subject (even though he didn’t want to be) as well as Jeff Wamsley and his Mothman Museum in the town of Point Pleasant the film is everything you wanted to know about the mystery and then some. Actually it’s the then some, particularly the sociological musings and history which raise The Mothman Legacy up from many other similar documentaries. Yes the film covers the scary stuff but the film tries to explore what that means for the people it touched. What did it mean for John Keel, or the witnesses or even the town of Point Pleasant itself. The film seeks to answer that question and as a result the film makes it greater.

Watching the film I was shocked and pleased at what I was seeing, even to the point where I was stopping the film even if I had to get up for a second.

Is the film perfect? No. It’s efforts at talking about scary stuff with a puffy opening where a young woman goes out painting and sees the creature and a few similar moments inside the film are not needed and a bit disposable. Regardless of that the over all film is solid reporting and highly recommended