Werewolf of Washington (1973) starts tomorrow at the Metrograph 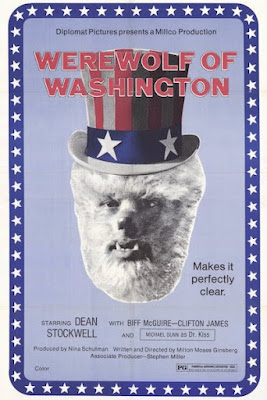 This political horror comedy has a reporter bitten by a werewolf while in Eastern Europe. Upon returning to the US he ends up as the press secretary for the President.

It’s 2020 so somehow it makes perfect sense that drive-in staple The Werewolf of Washington is getting a week long run at the Metrograph.  My amazement is not that the film is bad, its not, it is quite good so long as you see it as tongue in cheek, but rather this has been kicking around for the better part of 50 years. I thought everyone had seen it… then again there is a new generation of film fans who are hard pressed to watch anything earlier than the 1990’s. Their loss.

Werewolf is an amusing film. Spoofing both the politics of the day, it was made in the Watergate era and horror films it’s a one of kind film we don’t really see that often. It’s a film that seeks to not only entertain but take jabs at the current state of affairs.  I’ve seen this film way too many times (it’s on numerous double feature DVD discs I own) to really know what I think of it. I mean sometimes I like it and sometimes I’m just not in the mood.

I will say that what is really of interest to me is the shooting locations. Despite being set in Washington DC the film was shot on Long Island with land marks like malls  and skylines being decidedly not DC. Its so bad they don’t even try and hide the license plates.

If you’ve never seen it it’s worth your time.

If you have seen it before maybe its time to see it again.