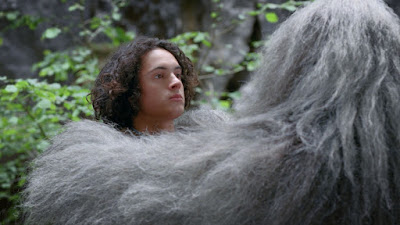 Mari, a goddess is made pregnant  by a mortal man. Giving birth to twins she turns them over to the Devil  to be taught and raised as his own. Atarrabi is good and eventually leaves the cave where he lives to see the world. Meanwhile his bother Mikelats stays with their "father".

How you react to this version of a Basque legend about two brothers raised by the devil will depend entirely upon  how you react to the mannered telling. Told in declarative statements and tableaus it is a very deliberate tale, much like director Eugene Green's other films.

While I loved sections of this film, there are some wonderful lines and moments, my interest waned during it's over long two hour run time. I could never warm to the way lines were delivered  and the often static shots. I wanted things to move along faster.

While this film didn't work for me, it may work for you- as I said I liked bits. See it at the NYFF