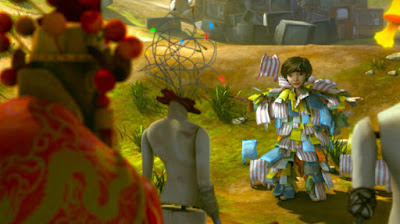 Sixteen year old Leaf has a miserable life. His mother is drunk, his family ignores him, school annoys him and the kids on the street beat him up. One night after being beaten up he notices a bunch of plastic bags floating down the street. As he realizes that what he is seeing is abnormal one of the bags turns and tells him to run. Leaf turns and sees a giant armored garbage truck barreling down. He runs and ends up making his way to a place where all the unwanted garbage lives. He becomes part of their community and their quest to go to a mythic place where they all can live happily.

This is a great looking and amazingly animated film that has sequences that will blow the minds of animation junkies who love the technical side of the art. Watching the film I was thinking that people are going to love this for the way it looks.

Unfortunately there isn't much beyond that, and this is ultimately a bleak unpleasant film that no one will really want to see.

The problem is the whole tone of the film. The opening sequence of Leaf's terrible home life is full of all the life sucks tropes but amplified to the point that we kind of want to turn it off from the start. The look of the film, until the "happy" ending is dark and oppressive. What happens to many characters is not fun and the stuff of nightmare's. It seems like it's the Toy Story 3 conveyor belt to the furnace sequence extended to 90 minutes.  Watching the film I was constantly asking myself if I really needed to be in this nightmare place- which is clearly being fashioned as a. family film.

The darkness would have worked except that the narrative isn't very good. Leaf is a drip and we really don't care about this whiney kid. The garbage characters are much more interesting but they orbit Leaf and don't get enough screen time. The choice of a plastic bag as a co-star allows for some great animation but dosen't allow for enough expression for us to latch on to. Worst of all the story has long sequences where things don't "move". Yes things are happening but they play like they are their to fill time or show off the animators' skill. The narrative flow never runs, it doesn't walk or even stagger but it crawls. Yes the visuals keep us interested, but narratively we just don't care.

To be perfectly honest not long  in to the film I was wondering why this was being shown. I completely understood the visual part, but the dark tone and meh narrative would have had me turning the film off had I not been covering it for a film festival.

Only recommended for those who love the technical at of animation