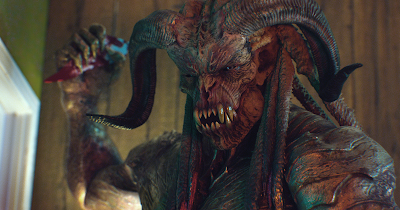 The film is the story of a chemical engineer whose daughter suddenly develops an terrible illness. He realizes that the company he works for maybe behind it and he kidnaps the head of the company. However things don’t well, he is shot and has to take pain pills. Its at that point his grip on reality begins to go- or does it.

Nominally a small scale film BEHEMOTH is largely set in a motel room which creates a neat sense of claustrophobia. However there are times when the walls of reality come down and the film suddenly expands its scope an we see the most amazing things.

Made for almost no money BEHEMOTH truly shines with its effect. With effects that exceed most big budget Hollywood films it’s a film that makes you go wow  repeatedly.  Clearly all you need is love and care to make effects work.

And that is what makes BEHEMOTH so special, clearly this is a labor of love. Sure the film has a small budget but there is love and it shows in every detail, including the performances. Bravo to the whole cast who sell the events and don’t phone it in. I was delighted.

BEHEMOTH is the little film that could and is recommended