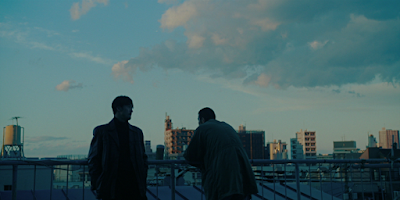 Getting out of prison an "ex-yakuza" member is hoping to be able to set up a new tech company. Hwever in order to do so he will need to get some extra money which means he ill have to wade into the old ay of life. The danger is if he does, will he be able to get out again?

One of the best films at this year's New York Asian Film Festival is the sort of film that the festival has been sorely lacking for the last few years, namely a wonderful reinvention of well worn genre that has style and talent to burn. This is the sort of film tht I came out of gong 'WOW" and wanting t share with everyone I know.

This is a great film. Its a stylist re think f the yakuza genre. As one character calls themselves its Neo-yakuza: Where several films at this year fest look back either in time frame or in in being a sequel, JOINT looks forward. Its a flm that is wonderfully its own thing.

I loved this film. It may end up as one of my favorite films of the year.