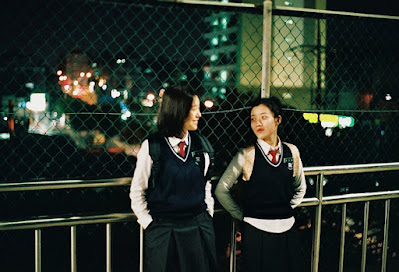 Not long after I saw SNOWBALL I was having a conversation with my brother  who was telling me about a bleak Korean horror film he saw that made him want to step in front of a bus. I countered and told him that he should see SNOWBALL a bleak drama that makes you feel worse.

The plot of the film concerns three teen girls who decide that they would be better off not living at home and instead run off to take an apartment together and make their way in the world because they know better. Of course they don’t and it all goes wrong.

Full of the Korean cinematic lust for depression SNOWBALL is just a trip in to the sad side. The girls go off on their own and as you expect things don’t go their way. Life beats them down and we get depressed.  While this whole film looks great and is beautifully acted the look and tone of it all kept me on edge as I waited for the various shoes to drop.

To be honest this isn’t my cup of tea. Its so much not my cup of tea that I did a double take pondering why I requested a screener. I still don’t know. Yes it’s good but I don’t need to be in this black place.

If you are a fan of Korean bleakness SNOWBALL is recommended.