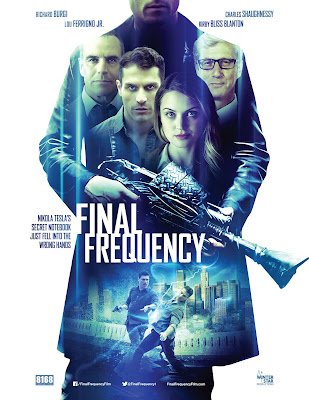 Final Frequency is about group of evil scientists who are using long suppressed technology created by Nikola Tesla to cause an earthquake. They are countered by other scientists who attempt to fight back as best they can.

This science fiction action thriller is an okay view experience that is hampered by wildly uneven performances, and prop designs that will have you laughing out loud. I’m not sure what to make of some of the performances here. Are some of the lesser performers bad actors or are they simply there for a pay check? I’m not sure. In either case they are terrible enough that we never get drawn into the film.  As for the leads some of their performances are good but no one seems invested in what’s happening on screen with the result we just don’t care either.

Equally bad is some of the  “scientific” equipment and weapons that just look silly. I completely lost it late in the film when there is a shoot out using the stupidest ray guns I’ve ever seen. They are these long rifle like things with bowls on the end. Watching the actors waving them about had me roaring with laughter to the point I banged my head.

I would skip this

Email ThisBlogThis!Share to TwitterShare to FacebookShare to Pinterest
Labels: american, not worth the effort, science fiction