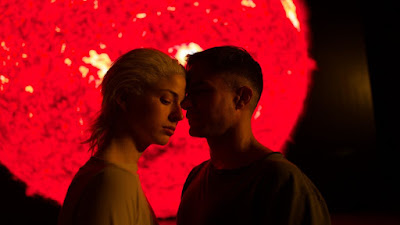 EMA opens with the arresting image of a street light on fire. It is a long held image of staggering beauty. It is so beautiful I said “wow” out loud and then hunkered down for what I hoped for a film that lived up to that promise…

…and on pretty much every level EMA is as good as filmmaking gets. It is film that is the absolute pinnacle of filmmaking with performances and images and sequences rocking me to my core. I was staring at the screen wondering if Oscar will notice this film when it finally gets a US release later this year. And then I realized that the script is a bit too much of a mess for that to happen which is sad because so much of this film rocks.

The plot of the film has dancer and flamethrower wielding pyromaniacEma getting more and more annoyed that child protective services have taken away her and her husband’s adoptive son. She wants the boy back because no one can love him like her. Never mind that she and her husband are neglectful and that the boy has deep seated problems (he severely burns her sister’s face) she is his mother.

Script aside director has made a film that is a stunner. Performances crackle and pop in all the ways that make other actor jealous. The various sequences and visuals make you react audibly over and over again. As a constructed thrill machine EMA delights in ways few films ever do. If you want to make a film that is going to get people’s attention this is the way to do it. Good, bad or indifferent as the film is a whole, the technical achievement of the film's pieces cements Pablo Larrain as one of the greatest directors working today anywhere in the world.

Unfortunately the script doesn’t really work. The characters, especially Ema and her husband seem disconnected from reality. They are in their own world. Things seem to take odd turns just because. For example it seems to be completely okay to wander the streets with a flame thrower on one’s back and torching things. While the cast sells the often WTF turns, we never fully buy it and as a result we are outside of events looking in. I suspect there was an intentional move to pump things up to make a point, but it’s kind of hard to go with it when you keep wanting ask questions of the character choices.

While part of me thinks that I shouldn’t recommend the film, my heart and emotions are blown away by the images and sequences and sheer craft that there is no way I can not. Simply put this is a master director working near the top of his came which makes the film worth seeing.