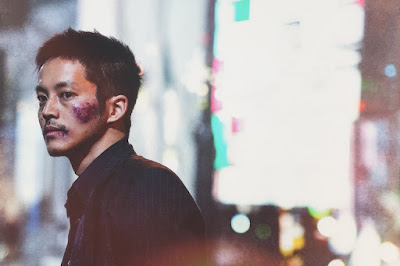 This sequel to one of my favorite films of 2018 – Blood of Wolves is a homage to some of the great crime films of the 1970’s that reflected the rise of yakuza. This time out we are set in the 1990’s and  it’s more a mix of cops and gangsters mixing it up centering around a gangster just out of prison looking for revenge.

While I loved the earlier film I was not so hot on this film. This is a tale that has a really mean edge to it. From an early rape  that includes a graphic blinding when our villain jams his fingers into his victims eyes telling her not to hate him  for doing it since it was her brother’s doing (the rape is an act of revenge) the film keeps us on edge because we don’t know what ugly thing is going to happen next.  While I have nothing against violence in a story here it feels gratuitous. Also some of the humor doesn’t quite fit.

The film also feels over stuffed. Running about 140 minutes the film has almost too many characters running around in a story that just seems to spiral out endlessly. While it isn’t bad it isn’t up to the lean mean earlier film which kept us on the edge of our seats.