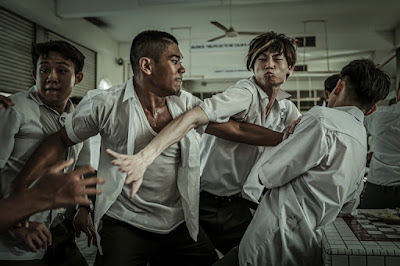 This is Namewee's investigation into a  riot at a Malaysian school in 2000 that left two dead and almost a hundred kids injured. The riot was a boiling over of ethnic tension between Malaysian and Chines students. It was hushed up and never reported on the media however word got out through other means.

I'm torn in my feelings for the film . The films structure of a police investigation beginning in the moments after they arrived is compelling and it sucks us in as we listen to various takes on what happened. The structure allows for a rapid telling of events that leaves us kind of beaten up. We also see the dislike that spawned the events still happening as the police abuse the frightened kids. The film is a punch.

The problem is that unless you are from Malaysia you my not have the context to really appreciate what it is showing us. Events just happen but the dislike between the groups has no context with the result that we are just watching a random event. For me the lack of context knocks this film down from a great film to a good one.

regardless of my feelings the film has a punch- though be warned the film only runs an hour.