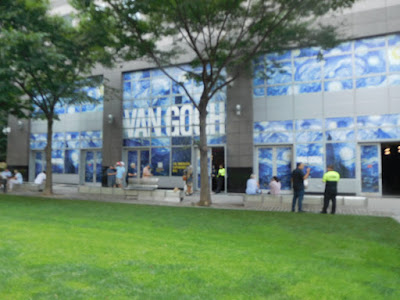 There are two dueling Van Gogh exhibits in New York. I'm told they are basically the same thing- a lead up to going into a room where they project images on a wall, before they give you crayons and paper in order to color. After that  you then can pay extra cash to use a VR headset  to go on a trip into Van Goghs works. And of course there's a gift shop.

I bought the tickets blind. I didn't know where it was, but I figured it was going to be like the Dali Museum Show  with all orts of screens and stuff. I was wrong.

The one I went to is on the Westside of Manhattan on Vesey right next to the Irish Famine Memorial.

Once the door opened we were sent up stairs-yes we had to go up three floors via stairs- to the exhibit. I found out once I got upstairs there is an elevator but you have to ask, and it dumps you in an odd place in relation to the exhibit. The stair thing kind of had me lost because it was a 95 degree day and I wasn't planning on mountain climbing.

Once you go in there is a lot to read on the walls- what we were going to see, some bits on important people and locations. Little of it ties into anything.

There is a giant vase over which they project various versions of his paintings with flowers.  Down the hall are bad prints of his paintings. The colors are off and you can see the pixels from the images they used to make them. They lost me here because I couldn't believe they were so freaking cheap in creating their props.

Around the corner and we are in a huge two story open space  where they project his paintings and related images on the walls and floor. Some of the images move or some of the things in the images move, the boats sail, trees rock and people bop. There were a couple of moments that were cool, one with sunflowers going all over and another with something unrelated to Van Gogh. I wanted to scream with the dancing trees during Starry Night- it looked like a freaking 2 year old designed it.

The best part of the experience was watching two tiny kids trying to jump on the sunflowers on the floor or to jump into the projected puddles.

I felt ripped off.

This is a small scale museum side exhibition blown way out of proportion and wildly over priced.

Despite the efforts made as we went in there is nothing here but pretty pictures badly utilized. Why couldn't they have gotten some video game programmers to design the show?

I have seen similar shows, and paid more for it and would gladly go back. Peter Greenaway's Last Supper at the Park Avenue Armory was one of the most amazing things I've ever seen. This was purely a cash grab of the worst sort. I mean- why didn't they spend some money to make decent projections and paintings?

Email ThisBlogThis!Share to TwitterShare to FacebookShare to Pinterest
Labels: art exhibition, not worth the effort