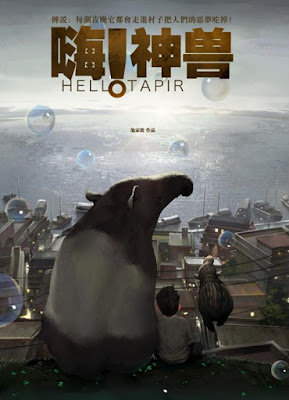 Full confession I should not have watched HELLO TAPIR. I am still broken by the death of my father last year and I have not even begun to process the loss. I say this because this film about a boy who is dealing with the loss of his father kicked my ass in several ways and in order to fully process it I’m going to have to see it again down the road.

This is a really good, incredibly bittersweet story of a little boy whose father fishes. When an accident injures several people on the boat the boys father goes missing. As his grandmother and mother struggle to come to terms with the loss and what this means for the family, the little boy begins to see some tapirs, the mystical creatures his father told him about. The tapirs will keep the bad dreams away.

Most of this movie is a beautiful and lovely representation of life being lived. In a way it all feels like a  documentary more than narrative film.  Having recently gone through the loss of a loved one, under different circumstances, I could relate to what we see.

As for the magical realism sequences, wow, just wow. The appearances of the tapirs are some of the most joyous moments I have ever experienced in the movies. They glued a stupid ass smile on my face  as pure joy bubbled up from the bottom of my soul. Incredibly stupid to say but those sequences have delighted more than almost any film all year, and maybe longer.

I have no idea if you will like HELLO TAPIR. I honestly don’t know my full feelings for it, but you need to see it because uncertainty aide this is one hell of a special film and is highly recommended.