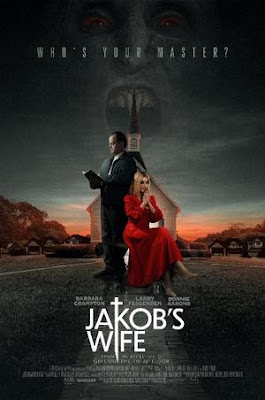 I liked Jakob’s Wife.  I say that because based on the rave reviews all of my friends gave the film I thought I was going to love it.  Sadly I didn’t love it, which is due I suspect entirely to the months of people insisting that I needed to see the film.

The Jakob of the title is a minister. His wife is a prim and proper woman who feels life closing in until she begins to listen to The Master and then proceeds to do terrible things to people.

Billed as a horror thriller, its more a horror comedy as evidenced by a late in the game encounter between Jakob and his wife which includes an appearance by local law enforcement who decide that what was going on was a nonviolent domestic incident (which it wasn’t). I was laughing at what was going on and not chilled.

This kind of reminded me of some of the horror chillers from the 1980’s and early 90’s. I want to say the Bette Davis  headed Wicked Stepmother, but that is quite right. You know the films that were full of domestic nonsense that are turned upside down by some evil.

In any case, I liked the film though I didn’t love it. I know several friends raved about Barbara Crampton, and don’t get me wrong she is wonderful, but the fact of the matter is she is always this good, and I don’t think most have them have really been paying attention.