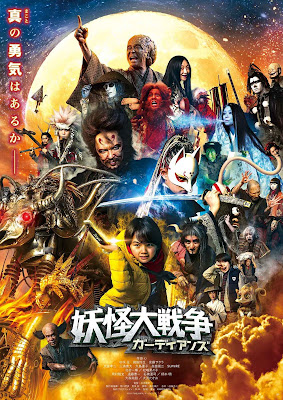 Takashi Miike returns to the world of Yokai Wars with a second film Guardians, the story of two modern brothers who join the battle with the Yoaki Wars.
Decidedly more kid friendly than the previous entry. You would be hard pressed to think that Miike was behind this film. On the other hand he is such a prolific filmmaker it’s almost impossible to nail him down as what sort of filmmaker he is. This is a grand romp full of great characters and bits of magic and whimsy that utterly delight.

Forgive me if I don’t really try to critique this film, its not something you can do. Its both clunky and forced, and perfectly made and dead on. The films near climatic Iron Giant-esque moment completely wrecked me despite it’s unevenness simply because the love and emotion of the story and the characters far outshone the narrative.

And of course there are the monsters. There seem to be hundreds if not thousands of unique monsters walking around and even if they don’t do anything the simply delight.

Personally I absolutely love this film to death. No it’s not an adult love- but one of the inner kid. This is the sort of film that if you show a kid at the right age you will damn them to loving the movies and monsters forever. I feel this way because Miike, a man who has made some of the most violent and ugly films ever has made a film with true child like magic and wonder.

God bless him and god bless this film.

Recommended for anyone who wants to see a film and be a wide eyed kid all over again.