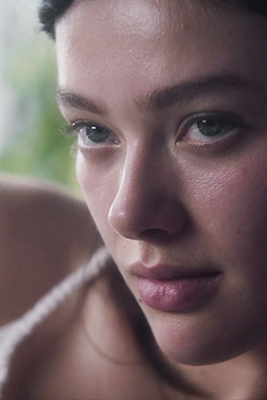 During an outbreak of a pandemic of a disease that wipes your memory and isolated family takes in a stranger.

Yes the idea of a memory wiping diseases have been used a great deal over the last few years. While there has been one or two good films there has been only one classic film Clare Carre‘s EMBERS up till now.  however we can add GLASSHOUSE to the classic list.

Kelsey Egan‘s GLASSHOUSE is a great film. It is a film that has a real tactile feel. This feels like a real place. This is a stunningly beautiful film to look at . It’s a film that we would want to live in (assuming there wasn’t a terrible disease raging). As I said to some of my friends, this is one of the most beautiful films playing this years Fantasia fest.

More importantly Glasshouse creates a world that makes sense. Watching the film I believed in what I was seeing. In a day and age when most filmmakers throw things together and call it a “world” Glasshouse creates a place where it all works together.  Nothing is out of place. When we come into the film we are uncertain of when this is taking place but as the film goes on and we discover the details if the story we realize that everything fits together. There is no odd burps. It all seems to be in a Victorian Edwardian world of over a century ago and it never goes anachronistic.

The writing is also stellar. It’s a film of beautifully constructed characters and situations that pull us in and drag us along.

I love this film and look forward to revisiting it when I can see it on a big screen.