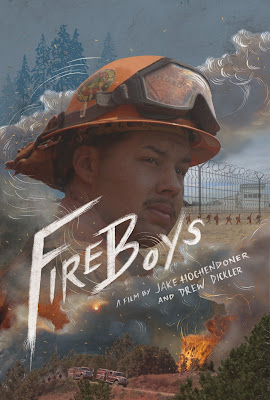 Portrait of the confined youthful offenders who have volunteered t fight the wild fies in California. The idea is that the men will be able to wok toward early release and get back on the straight and narrow. The problem is that because of their criminal background they can't transition into being real fire fighters.

I love that this film shows what it takes to be a fire fighter. More to the point I love that the film shows the issues the men face after fighting fires. So often in a film like this we can miss the bigger issues, but this film doesn't do that. We see that there is an injustice occurring- one that is going to get worse if the fires keep happening and we keep losing men who could b helping fight the fires.

It plays Dances With Films September 11. Tickets and information here