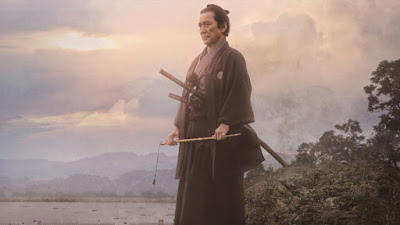 THE PASS is not what you expect.  Then again coming from director Takashi Koizumi who made AFTER THE RAIN, perhaps the greatest Samurai film I’ve ever seen it’s exactly what I should have expected. Like After the Rain this is a samurai film where the violence is not fully the point of the story.  Here there violence is the result of the course historical events and not the real focus of the film, its in the middle of the film and bookended by the important stuff the motions of the characters.

The film set in the literal last days of the Shogunate. The foreign powers are attempting to get a foothold in Japan. This sets up a move to end the Shogunate and restore the Emperor. As a result of this the country fragments and civil war is coming. Tsuginosuke Kawai the military head of Nagaoka is being pressured to pick a side. He doesn’t see that as advantageous for anyone and wants to solve the problem politically, however the forces are moving beyond him and he will have to take a side.

This is a very good historical drama.  It is a beautifully acted  film that tells a wonderfully human story of a man trying to do what he feels is the right thing.  I love that this is a film about the characters and not the battles. Indeed while the battle is good, its kind of less interesting than the maneuvering between the various characters.

If I have any real reservation about the film it’s the voice over sections that  explain the history in the film. While they are a necessary evil, they are presented much to academically with the reaction that they distance us from the story instead of bringing us in. It’s a minor flaw in an otherwise excellent and recommended film.