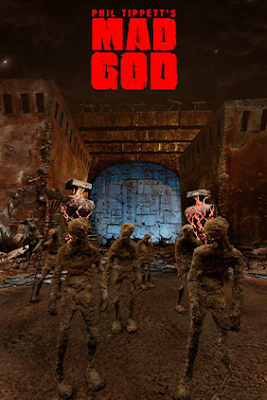 Phil Tippett's  MAD GOD has been in the works for 30 years, and it has finally arrived.  The result is jaw dropping.

The nominal plot has a mysterious figure taking a diving bell don into the bowels of hell. He then heads off to complete his appointed task...or something.

I am all over the place about this film. Its a film that seems to have been made in three different periods by three different people. The result is a cinematic experience that is unlike anything else you've ever seen.

The first half hour is quite simply one of the greatest films I have ever seen. stunning in the truest sense of the word it is full of images unlike anything that has ever ben put on film. It is not for kids or the sensitive since its full of blood and fluids and sex and shit and ugliness that will disturb even the strongest of souls. I floored at the technical achievement as well. I can't believe what it took to create this section of the film.

The second half hour film seems to be be a bit less than the first. We get a look at the person sending the people down into hell. We also get a second trip. The worlds are a bit less complex but it is still intriguing. There is also a sense that this section of the film as done years(decades) after the first as the film behind to incorporate video images.

The final 25 minutes is more mysterious actions in hell. The images are arresting but the plot drifts off and becomes something else. Its almost as if another film by another director was grafted onto the film. I should state that had the first hour not been as magnificent as it is this last third would play so much better.

This film is a flawed masterpiece. The first half hour is as good as filmmaking gets. It is everything I love about cinema, it shows me things to marvel at and makes me feel things and ponder life. As the film goes on the feeling lessens until in the last 25 minutes the film is just "pretty" pictures.

My all over the place feelings aside MAD GOD must be seen. If you love the movies you need to see this- I say that because this is ultimately one of the greatest achievements in cinema you will ever run across.