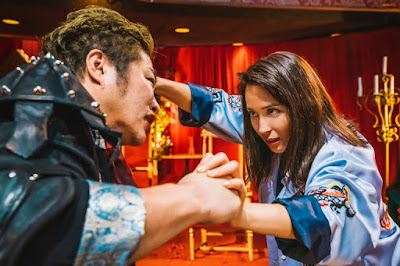 Office Royale is a damn near perfect manga adaption. It’s the story of gangs of office women within an organization battling it out  for supremacy in combat. It’s an amusing candy colored  film that produces a lot of laughs… and runs out of steam by the twenty minute mark.

As good as the film is the film is the plotting is one note. Yes there are some twists and turns in there but largely this is a series of set ups that lead to a battle over one thing or another. It’s the sort of arcs that you find in many manga/anime stories. And while it is works on a page over the time you are reading it, being trapped in a theater for 100 minutes it becomes something that wears you down.  I went from loving it to just kind of sort of liking it. I also went from thinking this would have been a blast in a theater to I probably would have walked out. (As it is I stopped it a couple of times)

This probably would have worked better as five or six episodes of a series with credit sequences to break it all up.

Worth a look if it interests you but be warned you mileage may vary.