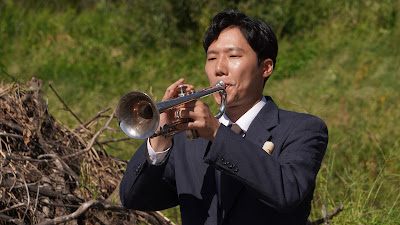 A town on a river is at war with it's neighbor. Everyday between 9 & 5 they fire volleys of bullets at each other. One of the soldiers is assigned to play the trumpet in the band. His view of the war begins to slowly change.
This is a mannered film that echoes the work of Ionesco, Kafka and Beckett that reals how bureaucracy and war are damning combination. Its a film that for all it's oddness seems right on target
As pointed as the film is the film is the running time of  almost two hours works against it. I am a fan of Beckett and Ionesco but at the same time I will be the first to admit that it is nigh impossible to do a film of their plays because in the real world of film, their mannered views of the film feels off. While BLUE DANUBE hits the right notes, there is a point where we disconnect from the film because  of the mannered nature.
Frankly I like the film a great deal. Indeed there are several moments that have been rolling around in my head for the last two weeks, but at the same over all it just hasn't stuck with me.
Posted by Steve Kopian at August 21, 2021