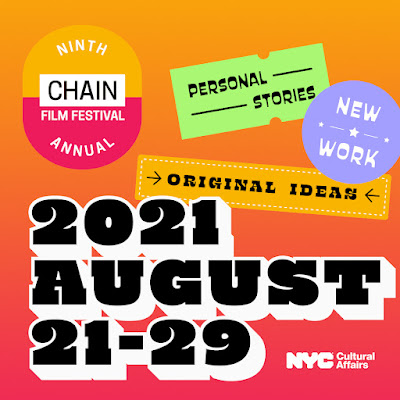 Stating Friday and running until the 29th is the excellent Chain Film Festival. The Chain is a wonderful small scale festival centered in New York that manages to always find killer films that end up as being some of the best I see each year.

A bunch of years back I bumped into the festival and instantly fell in love. The people from the fest were wonderful to talk to and they were programming great films. The films were films they genuinely liked and cared about. More importantly they want the films to be seen and talked about. In talking to people connected to the festival I've gotten the feeling that while they would like the festival to grow they would rather have the films seen and talked about. This point hit home when I was asked if I could cover more films so word could get out about them.

Sadly this year my coverage is going to be small. The problem is that there have been five other fests stating or ending at the same time. Blame it on covid which shifted the normal starts four weeks later than in previous years. I've had to pick and choose for all of them.

You on the other hand don't have to pick and choose, you can see it all. This year the fest is a hybrid so if you are in NYC you can so see something in person. If you still want to social distance or are outside of New York you can get the virtual experience. For either experience go here for tickets