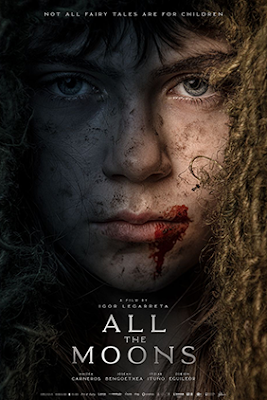 ALL THE MOONS is a wonderful addition to the vampire genre. If you liked LET THE RIGHT ONE IN you’ll love this film.

The plot of the film has a young girl injured when the orphanage she is living in is bombed during a war. Rescued by a strange woman she is turned into a vampire. How the next decade plays out is the film.

This is not a jump scare horror film but a mediation on human existence.  This is closer to LET THE IGHT ONE IN, ONLY LOVERS LEFT ALIVE and BYZANTIUM rather than DRACULA or NEAR DARK. It’s a film that is pondering what it means to be an outsider and to live forever, while telling us a very real human story that kicks the shit out of us.

This film is a stunner. It’s a film that upends expectations from start to finish. You may think you know that the film is at the start however as it goes on it shifts.  This is one of the most humanistic “horror” films I’ve seen. Frankly other than the fact it’s about vampires the film isn’t really a horror film. There are no scares except at the sort that come from the evil men do to each other. The tale is merely fantastical because of a couple of elements that are not realistic. However the one thing that is real is the emotion which is there in abundance, especially in an ending which will take your breath away.

Beautifully shot and exquisitely acted the whole film has the feel of special fairy tale that you will carry with you from now on.