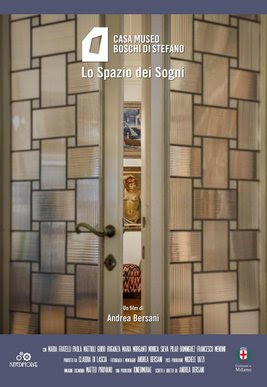 Boschi Di Stefano House Museum: The Space of Dreams- is a neat little film. It’s a look at the titled museum which is in an apartment in Milan. Once the home to Antonio and Marieda Di Stefano, who were artists and art collectors who kept all 2000 works on display in every nook and cranny of their home, it is a museum dedicated to showing new works as well as old ones with newly commissioned works of art swapped in for older pieces.

I really liked this film a great deal. Running a brief  52 minutes the film shows us the behind scenes working of the museum as administrators decide on which paintings to swap out, how new works are created and the role of the museum in the city and the world is discussed. It’s a grand time looking at beautiful art.

If I were to quibble at all about the film it would be I wish we spent  bit more time really getting to know about the lives of the Di Stefanos. Yes we get a sense of them and their love of art, but I would have liked to know more.

However as I said, it’s a quibble since what is here is absolutely choice.

Recommended when the film plays at the Chain Film Festival, it can be seen now as part of their virtual fest or in person on Friday the 27th. For tickets and more information go here.