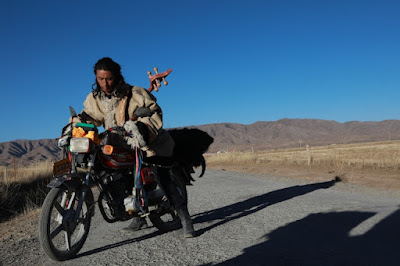 Country boy goes to the city in order to compete in an indigenous song contest. Along the way he meets a woman he thinks maybe a Tibetan goddess of wisdom.

Excellent drama is full of great characters and great music. This is the sort of unexpected charmer that you used to find with regularity at the New York Asian Film Festival, but not so much of late. Its a film that I hope to be able to add to my collection.

While I understand that the New York Asian Film Festival has been trying to remain apolitical concerning China and the horrible things it has been doing in Hong Kong, I know they have been simply trying to get beyond that and highlight the films from the filmmakers under the Chinese sphere of influence. But questions remain- where do they stand on China's abuses?

I have been trying to do something similar and highlight the films because I think many of the films need to be seen. For me voices need to be heard and I have been trying to do that despite being involved in several conversations about whether it's okay to cover any Chinese films or whether we should be covering the festival at all since they are getting money to put it on from Chinese sources.

The problem for me is that early in the film a discussion of how the music of Tibet was being changed for mass consumption and for what ever reason I had to stop the film and reconsider what I was watching. Yes, its a good film, but at the same time the film seems to be mining Tibet, a country China has been abusing for decades, for its own ends. Or rather it made me ponder if it was- however after considering it I really don't think it is. I went back and finished the film but  was left to consider where I stand about NYAFF political silence.

To be honest while I can live with the festival screening Chinese films, hell I'm covering them, I really wish they were more forward in taking a stand. I will not get into the Chinese list of human rights violations, we would be here all night. Instead I will say that from purely artistic stand point the Chinese has wrecked filmmakers ability to make the films they want. There have been all sorts of stories about how Hong Kong filmmakers have had to muzzle themselves to remain alive.

Yes, I understand this is a complicated matter. As you can see my feelings are all over the place. That said while I justify my coverage by saying the films are out there, I have my choice to cover or not. I can say what I want about China.

I don't think NYAFF can say that. I think the money and the access depends upon them playing nice, even if it is not coming directly om the Chinese government. I suspect that they will say otherwise.  but I suspect it's true since several people I know have tried to get them to make some comment on the record but they have refused.

Frankly I have no problem with the festival showing Chinee films, but I really think they should stop taking money from them since intentionally or not it will prevent them from speaking the truth about the Chinese crimes.