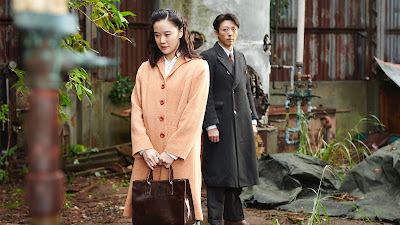 Kiyoshi Kurosawa does the unthinkable and tells a more or less straight forward historical tale, proving he can do pretty much anything and will always surprise.

Shot for Japanese television WIFE OF A SPY is the story of an actress married to successful business man in the early days of the Second World War (1940). When her husband returns from Manchuria things are not quite right and it transpires that he was altered by what he saw there in a medical experimentation camp.

A mix of war time domestic drama and espionage tale is not what I would have expected from Kurosawa how tends to tell tales that have an odd bend into them, I mean his REAL ends with the out of left field appearance of a sea monster. Then again this film doesn’t behave like most similar films you’ve ever seen. I didn’t expect the okay drama to turn to switch up and become a tense war time drama.

This is a really good film. Beginning with the fact the film shows a side of war time Japan that we in America don’t see, I mean almost all depictions are of soldiers and their families and the fact that we see something approaching “normal life” or filmmaking is kind of eye opening. From there we have a compelling story that doesn’t do what we expect. I didn’t expect a man trying to get word out of Japan of atrocities.

This is solid filmmaking. If there is anything to quibble about it is perhaps the fact that being made for Japanese TV the budget is less than for a feature and we can feel it in some scenes that feel a little small. But, as I said  that is a minor quibble especially when you are seeing a new film from a master director.

Playing both in person and virtually at Japan Cuts WIFE OF A SPY is recommended.

For access to the film streaming or to see it in person on August 27 go here.