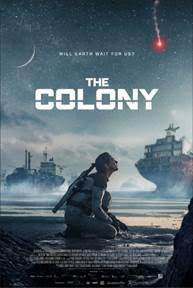 Decades after the wealthy left earth in the wake of environmental/global warming disaster scouts come back to the planet in order to assess the ability for people to return. Only one woman survives joining a band of people left behind. However she soon finds out that there is some one more dangerous lurking on the seas and it is closer to home than she could eve imagine.
Good science fiction thriller is going to play better for patient audiences. I say this because the film is deliberately paced and at times more talk than action. Its  not bad but some sequences, the post landing exploration at the start is really good but seems to be in real time.
I really like the film. I particularly loved the look of the film which creates a world we completely buy.
Hitting theaters and VOD Friday THE COLONY is recommended
Posted by Steve Kopian at August 25, 2021