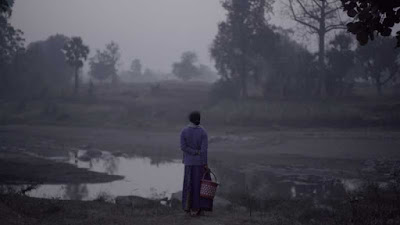 The Naxalites are a Maoist rebel group in India fighting for their tribal rights. The Indian government sees them as a threat. In the hope of ending the rebellion the government has offered to pay the rebels to surrender. Somi and her husband surrender hoping to stat a better life.
Going into this film I knew nothing about the Naxalites. The festival write up made me curious.
Watching the film I was left pondering a lot of things., What it means to need to rebel, what it means change your way of life and how do you reconcile you old and new lives. The questions didn't come in big moments but after considered sequences where you mind ponders what you've seen.
I liked the way this film made me think. I love that I wanted to lean in and consider what I was seeing instead of being spoon fed. It was great not to have everything given to me.
If you want to see something  about an aspect of life you probably don't know but will cause you to think about everything you know, this film is recommended.
Posted by Steve Kopian at August 11, 2021